Good morning dear friends, and to some of you, good evening. We are in the midst of Hurricane season on our side of the country. While we are located more inland in our state and may not experience as much damage from the storm, I wanted to take this moment to say to all of you experiencing or expecting extremely severe weather due to Hurricane Ian or other tropical storms, so please be sure to prepare yourselves as much as you possibly can. There are other tropical storms hovering in the ocean, but you and your family’s safety is on our minds.

Anyway, whether it’s a hurricane, tornado, wildfire, snowstorm, cyclone, or sandstorm, please make sure you are as prepared as you can possibly be. Don’t wait until the last minute. Whatever you do, don’t panic and don’t worry, just be as safe as you can with a plan in place. 🙏🏼 God bless.

Are my eyes playing tricks on me, making me see things that are not what I think they are, what they should be, or as I want them to be?

to observe the dried roots of a tree, masterfully and cantankerously stretch like an octopus above-ground.

To cast one’s eyes on the smooth surface of an island, as talking heads pop up in search of light

to turn the sun into an evening spotlight of tangerine rays, pulsating behind a blanket of clouds so vast

oh for this moment let the wow factor make you wonder, don’t try overthinking it, but just let it flow.

OK, I think most of us are not too keen on cockroaches, waterbugs, or whatever you want to call those paraphyletic groups of insects. They give many of us the heebie-jeebies, especially when we turn on the lights and find one furiously scurrying to quickly locate a hiding spot away from the sole of a homicidal shoe. So when I was reading an article about cyborg cockroaches coming to a disaster area near you, I thought, “what in the night crawlers is going on?”

So, here’s the deal. In the not-too-distant future, if an earthquake strikes and survivors are trapped under tons of rubble, the first responders to locate them could be a swarm of cyborg cockroaches. Yep, you heard me right, cyborg cockroaches. 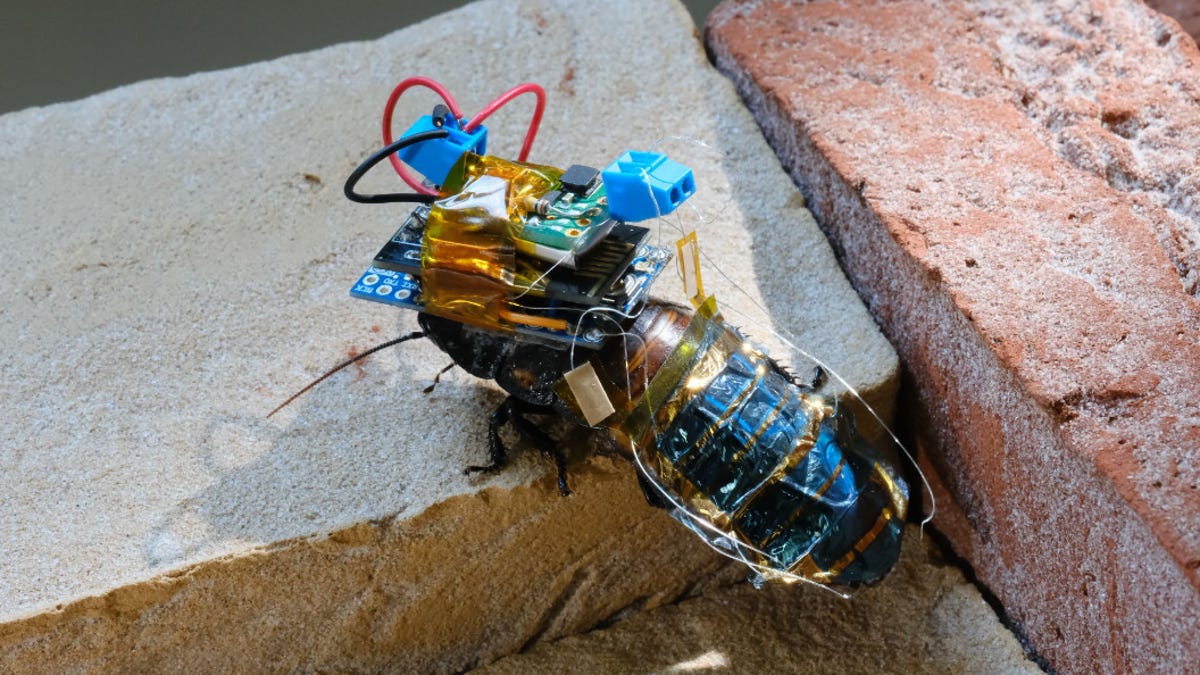 Japanese researchers created little backpacks of solar cells and electronics to mount on the back of the rather large bugs and control their motion by remote control. The Madagascar hissing cockroaches were chosen for the experiments because they are big enough to carry the equipment and have no wings that would get in the way.

You know, I already freak out when I see a bug of any size or any kind inside my house. Outside, hey, they can go their way and I’ll go mine. But honey, if I am trapped under rubble and all of a sudden I see a big hissing roach or Robo Roach accessorized with a backpack coming towards me, I may be like Super Woman and bust out from under that concrete debris or whatever it is on top of me, to get my behind away from those crawling critters. I respect nature and technology, but as a tag team, this is just a little too close for comfort! I swear I feel like something is crawling up my leg as we speak! UGH! 😝

I was thinking about my high school biology class the other day, and for some reason, I have been thinking a lot about high school, but don’t even ask me why. Yet, I remembered how we discussed the amoeba and paramecium, unicellular and microscopic which sort of fascinated me in a weird kind of way.

Isolation can be good, sometimes, when you need a break but it is not a way of life where we remain self-alienated, a hermit, and a recluse. I think about those who suffer from dementia or Alzheimer’s Disease, where it seems like they are in a foreign land, in their own secluded world. Those of us who have witnessed family members suffering from this dreaded disease know what I’m talking about.

We rely on each other. No one is self-sufficient. When the 17th Century English poet John Donne wrote in a sermon comparing people to countries, his point argued for the interconnectedness of all people with God.

No man is an island entire of itself; every man
is a piece of the continent, a part of the main;
if a clod be washed away by the sea, Europe
is the less, as well as if a promontory were, as
well as any manner of thy friends or of thine
own were; any man’s death diminishes me,
because I am involved in mankind.
And therefore never send to know for whom
the bell tolls; it tolls for thee.

Being alone is not the same as loneliness. We are not unicellular or microscopic, like the amoeba or paramecium. We are communal beings and we are designed to be involved in humankind, not castrated from it like an animal.

Don’t let toxic people suck the life out of you.

Don’t allow toxic people to dump poison in your system.

Toxic people can be radioactive and biohazardous in your life.

Many folks can’t get ahead because they have someone in their circle, poisoning their will to press onward. If you have to make some changes in your life, to leave those “toxic” people alone so they will no longer “waste” your time, then you gotta get to steppin’ away from these infected individuals. You don’t want to end up in the path of the walking dead!

“You have to let people go. Everyone who’s in your life are meant to be in your journey, but not all of them are meant to stay.” -Author Unknown

There is something shifting in the air, something that is changing marvelously for the birth of the new from remnants of the past. So here’s to something new, robust, and vibrant as we celebrate the arrival of the harvest season.

Today is the autumnal equinox, also known as the September or Fall equinox. Today marks the start of fall in the Northern Hemisphere and spring in the Southern Hemisphere.

And so we dance to the excitement of seasonal changes and personal harvests. Is this your season? Is this your time? As we mark the beginning of our reaping season, let’s not forget about the people around the world who are struggling to survive on so many levels. There are still wars being fought, food shortages abounding mercilessly, climate change intensifying, and natural disasters occurring everywhere. This song, “Harvest for the World” released by The Isley Brothers the year I graduated from high school in 1976, is a deep, spiritual hit that still resonates powerfully and is relevant today. I provided the lyrics after the following video. Thanks for stopping by and enjoy. Happy Autumn! 🍁🎑🍂

Yep, hail to that piece of writing instrumentation that was the precursor to the computer keyboard. Well, here’s a little lighthearted entertainment for all of my writers out there, featuring a whimsical, magical, musical composition I played with my high school band.  This piece, “The Typewriter” concerto is a short composition of light music by American composer Leroy Anderson, which features an actual typewriter as a percussion instrument. Oh, how I wish I still had at least one of my old typewriters today! Enjoy!

Sometimes it is better to lose and do the right thing than to win and do the wrong thing. -Tony Blair

It seems like there should be no room for discussion on whether or not you should choose to do the right thing. I’ve heard the following questions asked more often than not, and it pains me that these messages resonate with more callousness than I care to hear.

First of all, THOSE people are us. It seems like we have become so alienated from each other simply because of our biases. If you think it is not your problem today, it may be tomorrow. Help anyway.

Doing the right thing may not be popular in your circles or winning a congeniality contest, but there are dire consequences when you habitually do the wrong thing. I think it’s fair to say that we can see just how dangerous dishonesty can be. One lie leads to an even bigger lie, and the end result can be deadly. Do the right thing and be honest anyway.

You forgive others, not to condone what they have done, but for freeing yourself. As they say, you reap what you sow, more than you sow, longer than you sow. Forgiveness is not always easy. I can attest to that. But forgiveness certainly raises the bar on your character and spirituality. Forgive anyway.

I am always appalled when I am driving and see discarded fast-food bags, garbage bags, furniture, and even toilets along the interstate and major highways. Honest to God, I believe Mother Earth is retaliating, just look at the unusual weather conditions happening in the most unusual places. Are we paying attention? Climate change isn’t the only thing we have to worry about. Recycle, repurpose, reuse, and protect anyway.

“Integrity is doing the right thing, even when no one is watching.” -C. S. Lewis

When you see this banner flash across the television screen during the opening of a newscast or interrupting your regularly scheduled program, we know that 9 times out of 10 the news is not going to be good. When bad or disappointing things occur, we try to change the narrative by reporting good and encouraging news, even if it is not as sensationalized as the traumatizing news. When we try to make positive changes, the world says to us, why bother? What difference is it going to make? It won’t change anything. Nobody is going to notice. It doesn’t matter anyway.

Maybe to the world, it looks like things are hopeless, and it doesn’t matter if we do the right thing or not. Looks may not be all it’s cut out to be. It’s all about accountability. In what direction is your moral compass pointing? If there is something that we can do to make a positive change in our community, our businesses, our schools, or in the world, it behooves us to do it. What is reported on those breaking news reports should matter to all of us and not merely be a buffer between us and the broadcast.

You know, every day I am blessed to rise and see a new day. I try to approach it with a sense of hope, courage, joy, and gratitude. I seek opportunities when I breathe in the gift of life and exhale generous servings of encouragement.

HOPE in the midst of dread, sadness, suffering, and corrupt spirits. I want to send the message to others that possibilities are not futile but fertile.

COURAGE to battle fear, to persevere with confidence, and to encourage the weary to tear down walls that try to alienate and destroy the human spirit.

JOY that’s activated within, to spread to hearts, minds, and souls who need to be reminded that the world can’t take away what it didn’t give us unless you give it to them.

GRATITUDE to steer me away from pettiness, to remind me to be humble, and avoid sensationalizing negativity on the streets of waywardness.

These things make me feel alive and empower me to give with a sense of gladness. What makes you get up and go, thrive to be alive, and share a part of yourself?